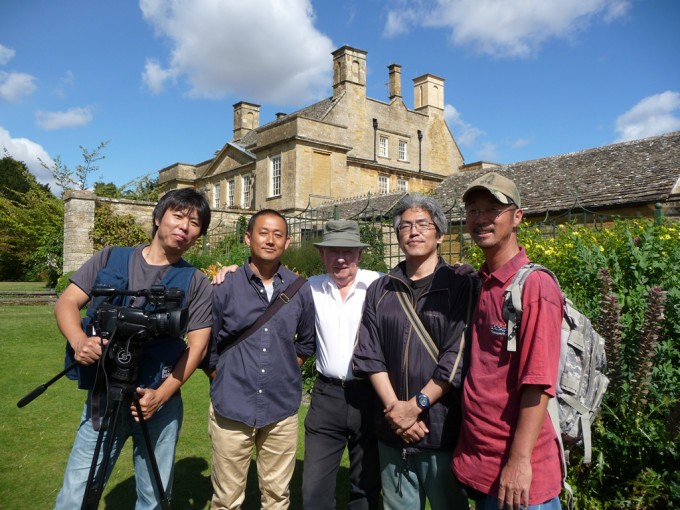 Bourton House Garden was invited to participate in filming in August 2011 for a major new Japanese TV series to be broadcast on BS Japan in the autumn.. It will be broadcast at peak viewing time and is anticipated to be watched by 2.8 million families! The TV series is designed to appeal to people who have already visited Britain and are thinking of returning with specific interests in mind – such as art, gardens, history or architecture.

Roelof Quintus, owner of Bourton House Garden, said ‘I am delighted and honoured that Bourton House Garden has been included in this prestigious TV series alongside some major heavyweights of British tourism such as Tate Britain, the British Museum, the Roman Baths at Bath and Blenheim Palace.’

The TV crew filmed the whole garden including the famous knot garden and the magnificent herbaceous borders; interviewed the Head Gardener Paul Nicholls and recorded some of the rare and exotic plants currently in bloom in the garden.

Christine Walford, Administrator, said ‘We were really pleased that the Japanese film crew chose this time of year to film the garden. Many gardens are now past their best but here at Bourton House Garden all the tender and sub-tropical plants are at their peak in August and September and the herbaceous borders are at their most flamboyant. We really feel the TV crew recorded the garden looking its absolute best. We have welcomed many Japanese tour groups this year and, after this series is broadcast, we hope to see many more in 2012!’

￩ ￫ x
We are now closed until April 2023.
We look forward to welcoming you again soon.
Newsletter Sign Up
Sign up for news and alerts here